A couple of weeks ago, Tim Darcy from the Montreal based post-punk band Ought played a solo show at the Lexington, London to promote his debut album.

It was a good show: Great music, performer, musicians and venue.

But the cherry on the cake was discovering the support band, who played Kinks/ Beatles / Blur / Mac de Marco esque music, but with their own little special touch. They were called Robert Sotelo. 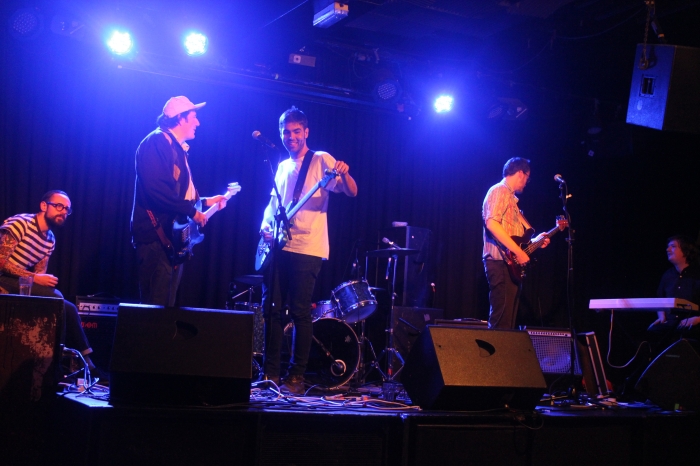 At the end of the show I felt the urge to talk to the musicians to tell them how much I enjoyed their music. (Should I ? Should I not? I will regret it if I don’t…Go! So I went for it). I approached the guitarist and the keyboardist, interrupted very awkwardly their conversation and submerged them with sticky compliments.

Q: Are you guys touring?

A: Well we’re from London, touring in our backyard I guess!

Q: Do you have an album out?

Q: I really like the sound of the keyboard in your music!

A: Oh, it’s a really old one, from the 80’s, Yamaha PS6 something. Sometimes it doesn’t work and you have to hit it hard and shake it during the concert. People think it’s part of the show & rock’n’roll but I’m just fixing my keyboard, really! Relieved it lasted the whole concert today!

I laugh, thank the keyboardist and guitarist and leave. These guys are nice and funny. I could have stayed a bit longer. We could have had a great conversation. I could have asked them questions for the blog. No guts.

So here’s my virtual imagined interview with the band.

Q: So I hear a bit of Beatles, Kinks, Blur, Django Django in your music.

A: Oh yes? That’s really kind of you. We love these bands and they’re definitely something we listened to growing up.

What they really meant: You little tiny mainstream NME hipster.

Q: How did you guys meet?

A: I was walking down the street, when I saw a weird looking man running away from crocodiles that escaped from Regent’s Zoo. I took my keyboard, smashed the crocodile and saved his life. My keyboard started working again. We became flatmates. He was a guitarist. We jammed. The beginning of the band.

What they really meant: I really can’t remember how we met. Through friends, really, like all normal people. Why does it matter? As if you knew any of our mutual friends. Jesus, you’re so nosy!

A: Well, we were all hanging out together all the time like you would imagine bands to do, a bit like a dog with 5 heads. We were whistling in the street, drinking milk, when as expected in London it started raining heavily. We ran our lungs out to the nearest pub. It was windy, cold, wet and we were absolutely soaked. The pub was playing some jazzy tunes, had a chimney at the back and was nearly all empty, except for one guy sitting at the bar. He had a big hat on.

I ask the bar tender for a baked aubergine cocktail. The guy lifted his hat and stared at us. He said: You guys remind me of Robert Sotelo. We had now idea who Robert Sotelo was.

The guy at the bar was David Bowie.

Special thanks to the keyboardist for the kind (alas short) conversation after the show. Thank you to the band for not suing the LondonY for writing an imagined extension to the conversation. Listen to Robert Sotelo here: