With the university fees reaching skyrocket levels, one could start wondering if all these sacrifices you do for top education are actually worthwhile. Is it actually worthwhile feeling the burden of university fees, sacrificing your social life on a Saturday evening to submit reports, revise for exams, manage your projects, when half of the lecturers don’t care? When people who studied half the amount you did end up being at the top of the companies?

For Paul De Panisse, it was well worthwhile. Graduated from Imperial College London in 2014 with a MEng in mechanical engineering, Paul has been one of the main engineers behind GyroGlove.

Paul De Panisse and Tiarvando pitched at the F-Factor in front of Simon Cowell, Google’s CEO Eric Smith and Linkedin’s Founder Reed Hoffman among others.

With this tremendous support from the world’s high-tech pioneers and the media appreciating their hard work, the engineers behind GyroGlove are now further developing the glove to take it further from prototype stage to the final product which could change the lives of millions of PD and ET sufferers. As the 26-years-old founder of GyroGear, Faii Ong, medical student, puts it:

“We want our 70 year old champion to be able to drink a glass of water with just one hand, our 40 year old advocate to be able to perform household chores and take care of her children, and our 10 year old beneficiary to stop being bullied in school because of his ‘shaking’.”

We asked some questions to Paul De Panisse, the lead engineer behind GyroGlove.

GyroGear was founded by Faii Ong, a medical student taking care of a 103-year-old Parkinson’s sufferer. Faii refused to accept that the current Parkinson’s drugs and support were all they could do to help the patient eat a bowl of soup or drink a glass of water…How did you meet Faii and how did you start working together to develop GyroGlove?

I had the chance to meet Faii at a hardware talk in October 2014. He was at the time looking for engineers to help him develop and prototype his concept of a gyroscope stabilisation system. Having witnessed the extent of Parkinson’s Disease on my grandmother for years, I immediately fell in love with this idea and started helping out on the side of my full time employment at MAP Project Office, a product design studio based in Shoreditch. After finalising our first proof of concept in January 2015, I decided to come on board and work full time to develop this product! 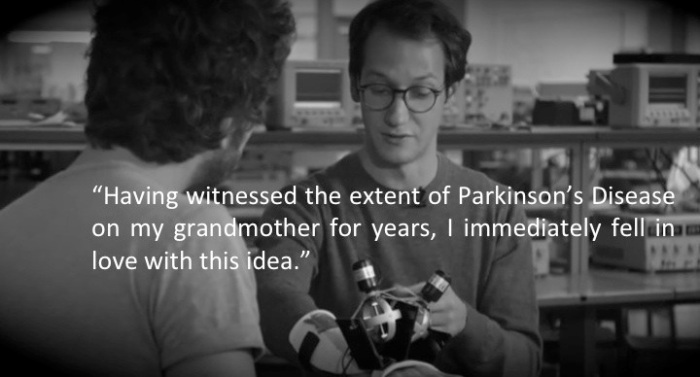 Photo taken from Paul’s interview in the Millennial Trailblazers series by Telefonica’s Digital Features. [1] Quote from the LondonY’s interview.

How did you come up with the idea of Gyroscopes to stabilise hands movements?

I was actually introduced to this concept by Faii himself. Even if from a medical background, Faii has a great technical knowledge and had made his own research. He then ran the numbers through some of his engineering friends and understood the potential of applying this technology to body tremors stabilisation. What I have been working ever since is how to miniaturise this concept into a wearable product that is autonomous, efficient, silent and lightweight.

You successfully pitched in front of the large audience of the F-Factor and in front of the elite of the high-tech world including Google’s CEO and Linkedin founder. How did it feel like presenting in front of all these people? Were you scared or did you try not to think too much about it?

It was extremely exciting. This pitch was the fourth stage of the competition, after having gone through an online video application, an initial pitch against 20 other great startups and a morning pitch against the 10 finalists. Being able to attend the event was already the best prize we could have hoped for.

How much time were you given to pitch GyroGlove and what was the best advice you were given that helped you prepare for this?

We had 90 seconds to explain the potential of our concept and prove the expertise of our team. I think we won because this final was not about which concept would generate the most revenue. We convinced the jury that we were the most motivated group and that we were the ones who could give the most results using the £10,000 prize.

Was wining the F-Factor a turning point in helping the ball rolling and getting all the media coverage and features? How does this tremendous media coverage help you? (Investments, reaching out to more Parkinson’s patients…)

From advisors, to hardware incubators to investors, we made a lot of great contacts that are still helping us to this day. Being backed up by such great companies and successful entrepreneurs really gave us the additional momentum and funding to keep developing this great product. The real media coverage really started in January 2016: we are now featured in some of the most respected tech, design, and medical media, such as the BBC, the MIT Technology Review or even Fast CoDesign. This is extremely motivating and encouraging: we are really doing our upmost to bring this product to the market towards the end of the year 2016.

What’s next for you and GyroGlove?

We are currently closing our first investment round and focusing on the product development of GyroGlove. There is a lot to do to ensure this device is comfortable to wear, is silent and lightweight enough, and that it produces the necessary stabilisation for a wide range of tremors and movements. We have the necessary exposure and patient feedback, we must now focus on finalising the engineering design and bringing this product to the hundreds of millions of people suffering from hand tremors worldwide.

If you had to give one advice for any student who dreamt of changing the world, what would it be?

Do not stay within your comfort zone. Go to talks, attend events, participate in hackathons and workshops as it is only by collaborating with people from different background that you will shape truly useful ideas and concepts. Creating revenue is one thing, creating a truly meaningful innovation to improve people’s lives is a complete other line of work.

To learn more about the GyroGlove and the exciting journey of the millennials developing it, follow:

4 thoughts on “How young millennials are developing a glove that could change the life of Parkinson’s Disease sufferers.”