I was already imagining how my blog post would look like. A healthy, easy recipe to share with everyone. Bulgur wheat with tomato sauce that always, always takes less than 10 minutes to cook. 6 minutes 38 seconds more precisely.

I was picturing this mouth dropping salivating photo that would make anyone run to the kitchen to cook this amazing dish.

But…I ran out of the ESSENTIAL INGREDIENT: BULGUR WHEAT.  (Bulgur wheat Wikipedia’s definition: ” Bulgur (also Burghul,[1] bulghur, burghul or bulgar) is a cereal food made from the groats of several different wheat species, most often from durum wheat. It is most common in European, Middle Eastern, and Indian cuisine.”)

So I’ve decided to scroll into my old mobile phone pictures to find the picture of the first time I’ve done Bulgur wheat with tomato, sharing it with my mum.

Doesn’t look as good as it should.

Doesn’t really want to make you run to the kitchen, right?

I swear, it was very tasty. It was very easy to do. It did take 6 minutes 38 seconds. It’s healthy.

Recipe: 1. Chop oignons and fry gently (you can ignore this first step)

3. Add half a cup of bulgur wheat.

4. Mix for a few minutes. Add  salt, black pepper, or oregano or both and a table spoon of olive oil.    (Optional:  garlic)

Such a shame the photo doesn’t make this meal justice. I even tried to photoshop the photo to make it look nicer. Not a big success, I must admit.

I finally googled Borghol a banadoura (The way it is called in Lebanese). This picture came up. 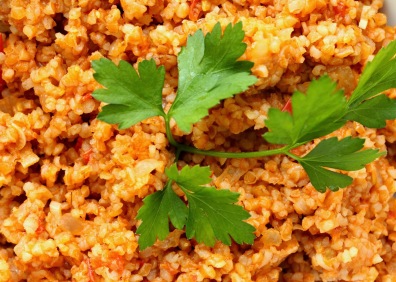 All credits for this very nice picture go to Rita from cookwithattitude.com

Thanks for Rita, from Cook with Attitude for sharing this picture with the world. She’s the real deal, check her blog on  www.cookwithattitude.com.